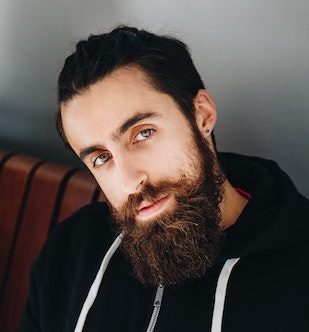 Check out other interviews with our students.

David has now finished studying engineering fabrication and is currently on the Temporary Graduate Work Visa (Subclass 485). He is living and working in QLD and working in the industry. David is from Israel initially. Before coming to Australia for the first time, he lived in Thailand for three years as a scuba diving instructor. He met his partner there and together they decided to come to Australia for their next adventure.

What were you doing back home in Israel before you started travelling?

I worked in a plastic producing factory before I moved to Thailand. My nieces lived in Australia and it was always my dream to study here one day. I made this dream come true in July 2017 and my course finished in July 2019. I am now working in Australia in metal fabrication.

Where did you study?

I studied Certificate III and IV in Engineering Fabrication at TAFE Queensland in Brisbane.

Where have you lived when you were studying and now?

Since I came to Brisbane in 2017, I have lived in several different places. When you have to cross the river during the morning traffic, it can be quite the commute. We love it here though and wouldn’t want to be in any other city. We are currently living right in the center of the city.

How many days did you go to class per week?

I had class three days per week: Tuesday, Wednesday and Thursday. When I just started school, I used public transport to get around but I wouldn’t recommend it. After a while I bought a small car and from then on it took me less than 30 minutes get to campus.

Did you have homework?

We didn’t get specific homework assignments, but it was definitely a smart move to do some extra studying in your spare time – especially when there was an exam around the corner. With my course, we would start one subject at a time and it would go for just a couple of days or several weeks. Then once it was done we would have an exam. Some subjects were quite difficult and required extra studying. Keep in mind my course was very practical, so it is only really theory where you need to do any homework.

Did you have to buy extra materials for your course?

Every major thing was provided by TAFE. The facilities there are great. But there were just small, cheap stuff. We needed gloves and other PPE, measuring tapes etc.

Did you do vocational placement?

Yes I did. We had to do 400 hours of vocational placement as part of the course. I worked for a lightning company call FOS in Salisbury. I actually did paid work there when I was studying and I continue to work there now.

How did you deal with money?

I didn’t come over with too much so at times it was tough. But I was smart with my money and I just accepted any job I could get my hands on. I worked several side jobs, like window tinting, paintball, welding, timber flooring, kayak tours to name a few.

How were your teachers?

My teachers were very good. We had one main teacher and the occasional fill-in. I feel like our main teacher prepared us very well for the job and I am still in contact with him because we became quite close. He had a lot of industry experience he could share with us.

Tell us about your classmates.

We had a fairly small class of only twelve people. We all got along and it was a good atmosphere. My classmates were from all over the world: Colombia, Korea, South Africa, Brazil, China,… Most of them were between 22 – 30ish.

Was it difficult to get a job in the industry?

It was actually very easy for me to find a job. I have continued to work for the company on my temporary grad visa and want to keep working there into the future.