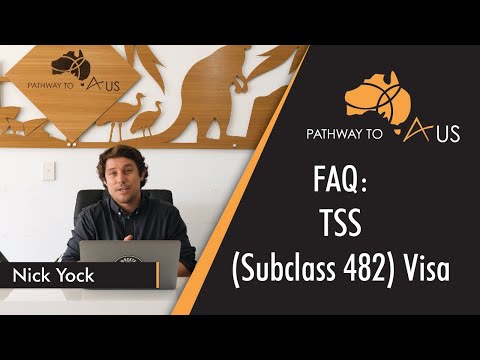 Hi guys, this is Nick from Pathway to Aus. Today, I’m going to talk about the employer sponsored visa, formal name is the Temporary Skill Shortage Subclass 482 visa, but let’s just call it the Employer Sponsor Visa.

The Employer Sponsor Visa, the TSS visa, recently replaced the previous 457 visa. To be honest, I think the 457 and the 482 are very similar. It was just kind of like a rebranding by the government. There was a few different things in there which have changed, but today I’m still just going to go through and outline what I think of potentially, you know, some of the main questions that I get asked as a migration agent about this visa. So firstly, look, the 482 or TSS visa now I would say is a lot more difficult than the previous 457 visa. Immigration are a lot more strict or stringent. As a migration agent, we always hear about previous stories where someone has a friend who got a 457 visa with no skills, no experience and now he’s got PR. That was three or four years ago, it doesn’t happen like that anymore. Things have changed. Immigration have become a lot more strict or stringent.

So one of the main questions I get is who can sponsor, who’s eligible to being sponsored. And my response is usually, most companies in Australia from large corporations to potentially small startups, maybe eligible to sponsor a nominated applicant. Part of the main requirements are that the company must be operating lawfully in Australia. So there isn’t a specific time period of how long the company needs to have operated. A recently created company however, maybe put under a little bit more scrutiny than one with a long financial history. For example, if you’re a new restaurant which has started up but you’ve got a really tight lease agreement which has several years on it, you’ve spent thousands of dollars our equipment inventory staff and everything like that. Immigration can see that you’ve got a bit of a history, so will most likely be giving you the standard business sponsorship. However, if you’re just a small startup, operating out of a garage with not much income, it could be a little bit difficult for immigration to approve that.

Company needs to be able to meet its
financial obligations

Another thing is that the company really needs to be able to meet its financial obligations. So if you’re a company with a lot of revenue coming in, you can probably pay to sponsor someone, you can pay their salary, their superannuation and things like that. But if you’re a small startup with $30,000 in revenue, how are you going to pay to cover the expenses of a new staff member? It could be difficult.

Apart from that, becoming a standard business sponsor, generally speaking, is the easy part. The much harder part and where these are always refused is in the nomination stage. So I’m just going to talk about a few common requirements for the nomination. Firstly, there needs to be a genuine need for the role. Have sales been increasing? Have previous employees quit? Are you finding it difficult to find it in Australia? The company also needs to not be able to find an Australian citizen or permanent resident for the role, because of the issue you’ll need to do some labor market testing. You need to have two advertisements up for at least 21 days. You need to have reviewed all the applicants. If someone is eligible, who’s applied, they need to be given the first right of refusal for the position. The employee needs to be paid the Australian market salary which could be whatever it is for the role, but it needs to be at least $53,900. That’s the absolute minimum. And finally, the occupation needs to be on one of the government’s medium to long-term list or short-term skilled occupation list. If the occupation is not on there, you could be in trouble.

This leads onto the next question we’re commonly asked what happens if my job isn’t on the list. I get asked this question regularly. Someone will come into the office and they’ve looked at the list of the STSOL and the MLTSSL and I can’t find their occupation on the list. There’s a lot of occupations on the list. If you dig down, they’ll have different sorts of specialized occupations underneath them. So if you scroll through the different occupation titles and then look through the specialization, you might find something that’s right for you. For example, carpentry is on the list and one of its specializations, shop fitter isn’t, but it comes under that of carpentry. Marketing specialist is on the short term list, however alternate specializations that fit under market specialist include brand manager, product manager, sales promotion officer. So if you have one of those roles, maybe you can turn it in to meet the requirements for a job that is on the list under marketing specialist. Although to be honest, marketing specialist just kind of sends up red flags with immigration.

Finally, on the topic of occupation, I just want to express how important the job duties are. So what you actually work in the role as opposed to the job title. For example, if you have an occupation title of an accountant, but you are doing the duties of a bookkeeper, your visa might be refused because you’re actually doing the role of a bookkeeper, but you just called it an accountant. So before choosing an occupation, make sure you have a look through the duties that are listed and make sure your job fits the role. Please note before choosing the occupation as well it is really important that you ensure that you meet the specific education and work requirements for the role.

So what qualifications and education is needed? Applicants will need to show that they possess the required education or qualifications, as well as the required work experience to fill the role. It’s simply not good enough to just have the skills to fill the role. Immigration need to see the paperwork and the work experience. So they want to see everything. Education and the qualifications that you need for the role depend on which role you are filling. For example, as an accountant, you need a bachelor degree. To be a painter, you only really need a cert three in painting and decorating. So the education requirement varies.

Finally, and probably the most important question that I get asked, is can the new 482 employer sponsored visa turn into permanent residency? So to put it simple, if your job is on the medium to long-term list, the MLTSSL, yes, you potentially could get permanent residency in the future. If your job is only on the STSOL, the short-term list, it maybe very difficult to get it. Previously on the 457 visa, if you worked for two years in your occupation, you could then turn that into PR through the temporary resident transition stream, but that’s not the case anymore.

Other options which may lead to PR other different, certain types of days that you could consider would be the state nomination 190, the 489 visa, the regional sponsored 187. Tthese are all great alternatives. Alternatively you could consider doing the studying a course, which will skill you in an occupation, which is on the medium to long-term lists.

I hope you’ve found this to be quite helpful. I must mention that everything that I say is general in nature. So if you would like to have your specific circumstances reviewed, I would recommend contacting a registered migration agent, like Pathway to Aus, and they’ll be able to advise you accordingly. Thank you.

How Can Studying a Trade in Australia lead to Permanent Residency?